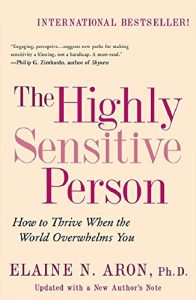 Dr. Elaine Aron’s seminal work in her first book The Highly Sensitive Person,  was a true wake-up call to many of us who just didn’t understand why life seemed harder. Dr. Aron herself had struggled for many years which culminated in college while working on her Ph.D in Clinical Psychology. Her struggles led her to see a therapist who gave Aron the concept of being possibly being highly sensitive. This spurred her forward to making her college campus into her own research project. After interviewing a dozens of students for grueling 3-4 hour sessions, she was surprised at a common thread of approximately 15-20% of the students being highly sensitive. From there she was able to develop a scientifically valid and reliable scale to measure client’s sensitivity – The HSP Questionnaire. Aron’s 27 question yes/no HSP self-test is still administered by HS therapists and others with solid results.

When the medical community minimized her findings, Aron courageously decided to try to prove her theories. She was able to obtain grants and proceeded to conduct many functional MRI’s (fMRI) on HSP versus non-HSP brains (based on their scores on her questionnaire). Low and behold, she was able to prove, by scientific evidence, that HSP brains were more reactive to stimuli, and that more of their brains lit up, showing greater neural activity in the brain when compared to the non-HSP scoring subjects. She knew this brain trait was real, and she was and still is determined to share it with the world. For more information, look for her books on Amazon and see her beautiful documentary; “Sensitive; The Untold Story“.